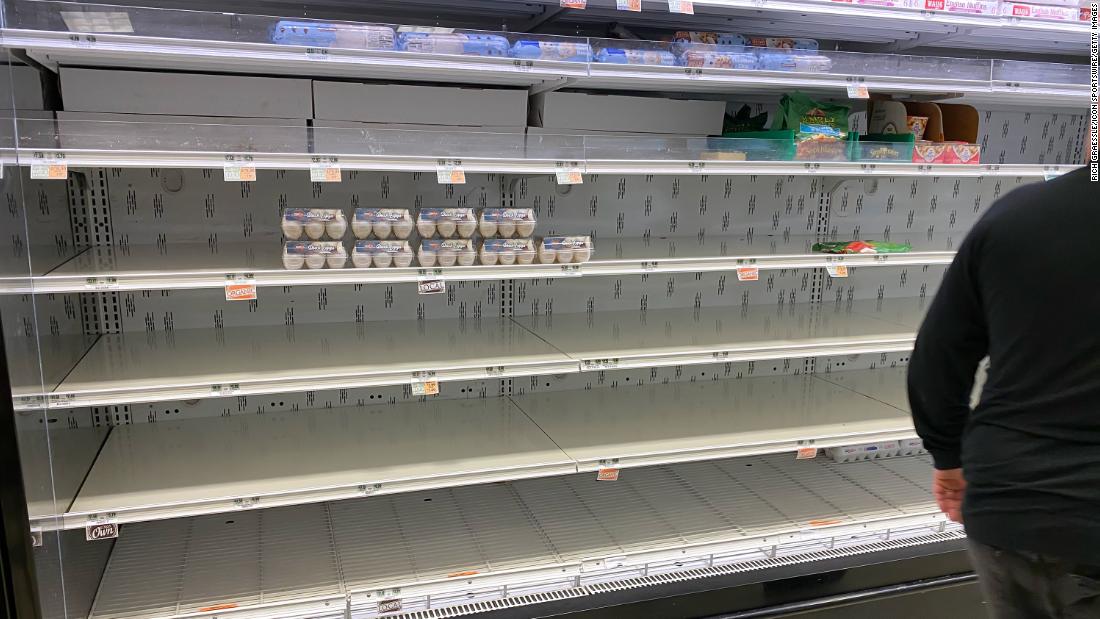 Egg sales increased 44% for the week ending on March 14 compared with a year ago, according to the most recent Nielsen data.

and other big grocers have implemented limits in recent days on purchases of eggs, cleaning supplies and other products that are in high demand from customers.

“Consumers are panic shopping and, much like we see ahead of a snow storm, they are purchasing staple items (milk, bread, toilet paper, and eggs). Except obviously this is on a national scale and for a much longer period of time,” said Brian Moscogiuri, director and egg analyst at Urner Barry, a commodity market research firm.

Retailers are ordering up to six times their normal egg volumes and have depleted the supply that producers were beginning to build for Easter, he said. “Buyers have paid huge premiums to secure loads.”

Wholesale egg prices have risen 180% since the beginning of March, according to Urner Barry, which publishes a daily benchmark for the industry.

“Wholesale prices for shell eggs rose precipitously through the week,” the

said in its weekly report Friday. Companies were struggling to “maintain sufficient stocks to meet a heightened level of consumer demand.”

President Robert Sheedy noted price inflation on eggs during a call with analysts on Tuesday.

When suppliers’ prices rise, grocers are faced with two options: Pass off the cost to consumers or take the hit to profit. They are doing both.

“Due to a limited supply and higher than usual demand, our suppliers have increased their prices on eggs,” a sign posted at

in Boston said. “As a result, you may see higher prices starting Saturday, March 21, as well as potential interruptions in supply.”

Dennis Curtin, a spokesperson for Weis Markets in the northeast, said the grocer has taken “limited pricing action so far.” Suppliers have notified the company that egg prices have increased.

Egg prices have increased by 14% at Morton Williams stores in New York. The company is frustrated that it’s paying double for eggs from its suppliers during a crisis.

“It is unconscionable that the egg industry has doubled prices because of increased demand. It is hitting low-income New Yorkers the hardest, as so many have lost their jobs working in restaurants and hotels,” said Avi Kaner, a spokesperson for Morton Williams.

2020-03-26
Previous Post: Egg prices are skyrocketing
Next Post: Coronavirus: Why some countries wear face masks and others don’t