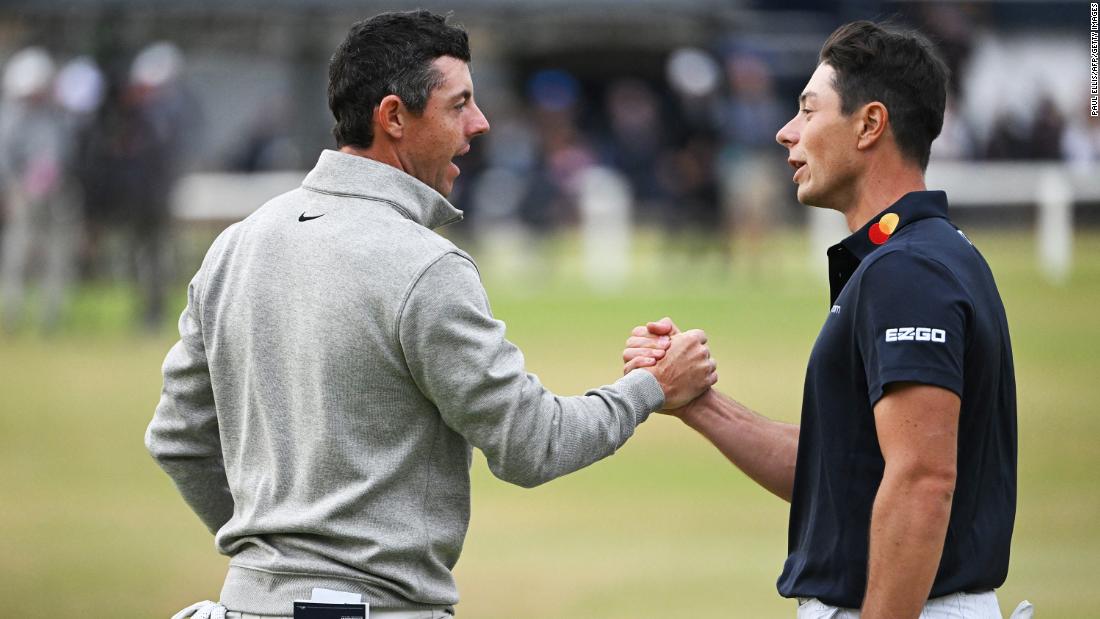 Partnered for the third round at the Old Course, the duo began the day tied and could not be separated after 18 holes of spectacular golf, ending the day sharing a four-stroke advantage at the summit.

Their six-under 66 score saw them leapfrog and race clear of Cameron Young and day two leader Cameron Smith, who carded 71 and 73 respectively to head into Sunday tied at 12-under par.

Hovland lit the touchpaper for a classic Open duel at the third hole, igniting a run of four consecutive birdies. It set the tone for a clinic of putting skill from the Norwegian who, having bogeyed twice in each of his opening two rounds, would later sign an unblemished scorecard.

In only his second Open outing and his first in the major at St. Andrews, the 24-year-old looked unflappable in the midst of raucous crowd support for his Northern Irish playing partner, smiling his way around the Old Course.

“I don’t mind [the support for McIlroy], it doesn’t take the pressure off of anything,” Hovland told reporters.

“There were still some shouts there for me as well, so I appreciate those. At the end of the day, I’ve just got to play my game and not worry about anything else.”

With Hovland chasing his first major, McIlroy kept pace with his younger rival courtesy of the type of brilliance that has seen the 33-year-old lift four major trophies, including the Claret Jug in 2014.

Three birdies in five to close the front nine moved him a shot behind, before a remarkable eagle from the bunker at the 10th hole drove him into the lead.

Despite ending up in the sand, the Northern Irishman looked good for another birdie following a booming tee drive, only to then rock the nearby grandstands with a stunning, 27-yard chip into the cup.

As McIlroy raised his arms to take in the appreciation of the crowd, even Hovland offered a congratulatory fist-bump to his competitor.

“Rory is a good guy, so I don’t mind saying good shot to him,” he said.

“Disregarding the situation you’re in, that’s just a filthy bunker shot, so you just have to go, ‘hey, that was a sick shot.’ It’s just part of the game.”

The interaction epitomized the competitive respect which endured throughout the pair’s round, with the duo talking at various tees while waiting for the group ahead. However, McIlroy believes the discussions — which varied from footwear to what Hovland had been up to over the last fortnight — will naturally dial down on championship Sunday.

“I’m not averse to having a chat on the way around, it’s fine. It probably keeps both of us a little loose,” McIlroy told reporters.

“But you can tell there’s moments when to talk, and moments not to. And that was the case today as well.”

‘What the hell am I doing here?’

Hovland kept pace with a run of seven straight pars before a slip-up from McIlroy at the 17th saw the Norwegian draw level. McIlroy did well to avoid a worse fate after his second shot settled close to the wall of the road hole, the

The duo sealed their duel with matching birdies at the final hole in a fitting end to a day Hovland couldn’t quite believe actually happened.

“I was thinking, ‘What the hell am I doing here?'”, the Norwegian said.

“Just to be here is very special, but to have a chance to win one, I have to pinch myself. But that doesn’t mean I’m going to hold back tomorrow.”

With McIlroy’s 2014 Open triumph coming at Royal Liverpool, to lift a second Claret Jug at the ‘home of golf’ — on the 150th edition of the event — would be a “dream come true.”

“It’s what dreams are made of and I’m going to try to make a dream come true tomorrow.”

After opening with a bogey, Cameron Smith saw his two-stroke Saturday lead quickly evaporate, with his disappointing day compounded by a double bogey at the 13th.

The Australian’s playing partner Cameron Young also left the course ruing some costly mistakes, despite gaining the two strokes needed to tie Smith. The 25-year-old, who had set the clubhouse target with a scintillating opening day 64, saw his five birdies offset by two bogeys and a grueling double bogey at the 16th.

South Korean Kim Si-Woo and World No. 1 Scottie Scheffler trail the two Camerons by a stroke after shooting 67 and 69 respectively, with Dustin Johnson a further shot behind, after carding 71.

Shane Lowry had looked ready to rise into contention after stunning back-to-back eagles, before a disappointing finish left the Irishman to rue his “horrific” putting in a 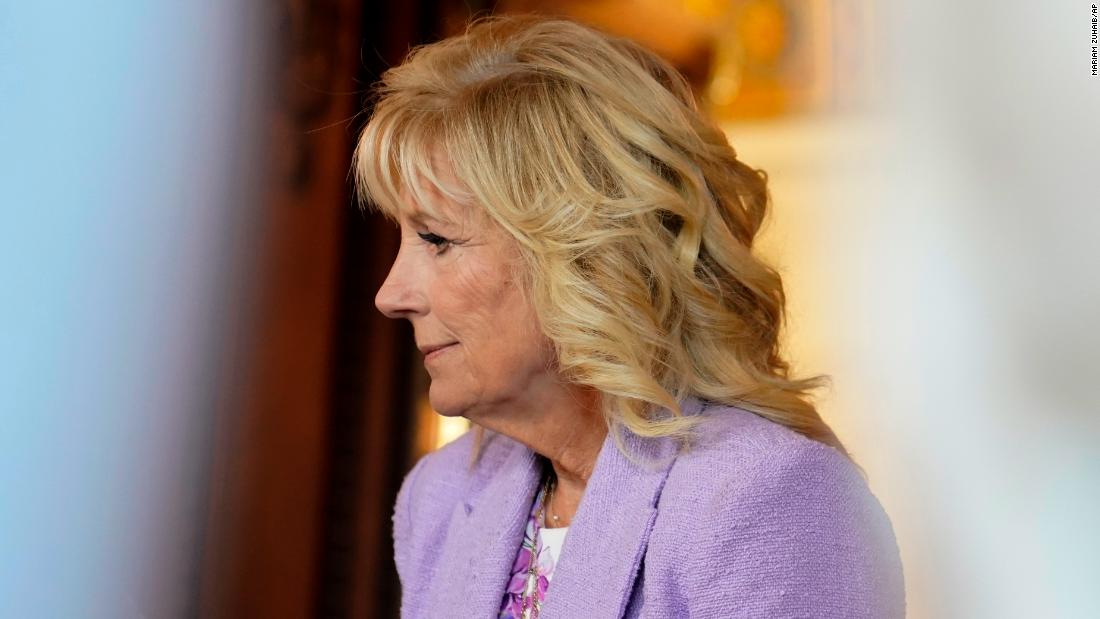 Previous post Jill Biden on President Joe Biden’s hindered progress: ‘He had so many hopes’ 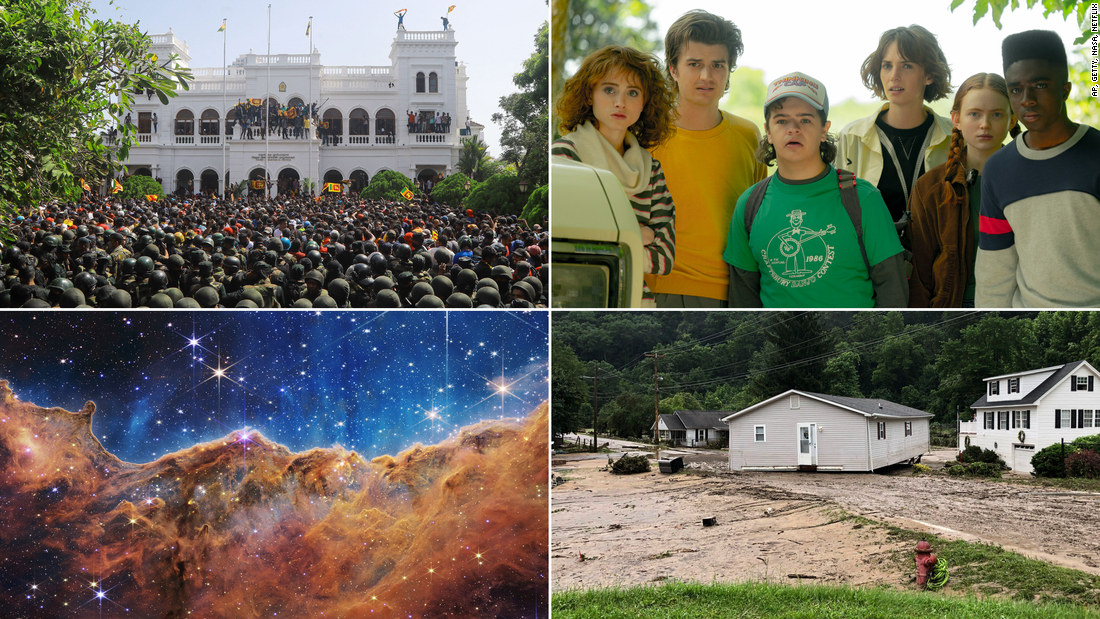