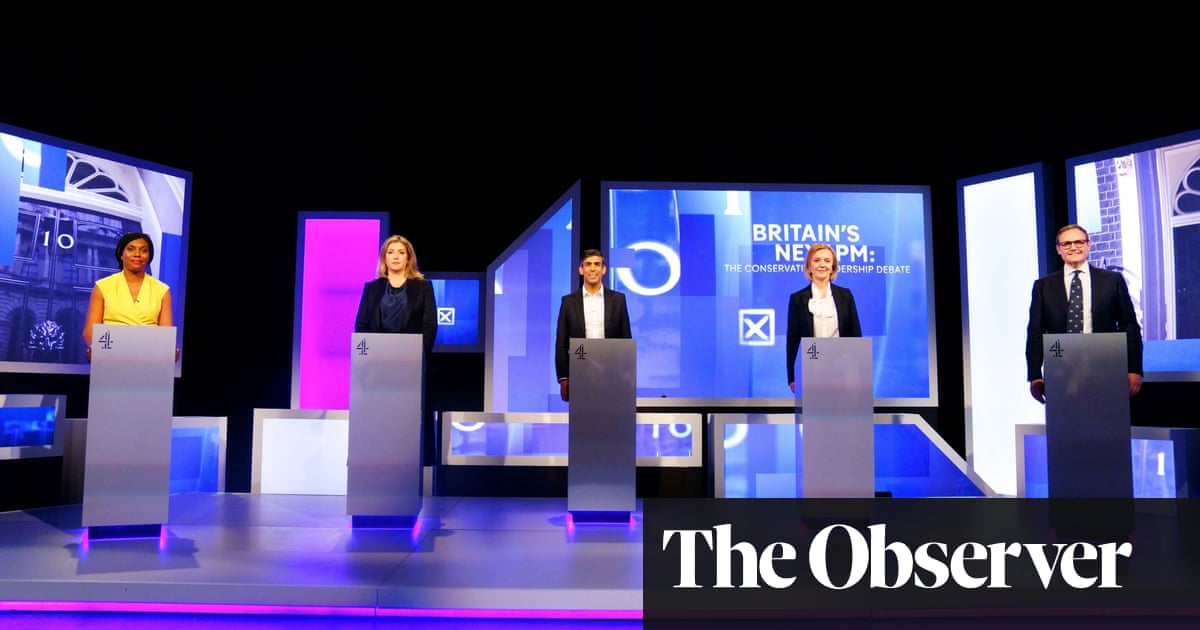 Tugendhat has a clear track record as a Johnson critic and is untainted by any time in the current PM’s cabinet. In fact, he has no experience as a minister at all, despite entering parliament in 2015. Tugendhat only just secured enough votes to stay in the race over the weekend and has actually lost support from some MPs during the campaign.

His allies hope some strong TV debates can improve his fortunes, and snap polling suggests he did well among voters as a whole. It is Tory MPs, however, he has to impress. Did we mention he was in the army?

Weakness He has still not held any ministerial posts, which has been a focus of attacks, given that the new leader will have huge issues to deal with.

What opponents say “It’s easy to criticise from the back seat,” said Badenoch on Friday, attacking Tugendhat as an armchair critic.

How they win All other candidates inexplicably pull out after a weekend in the sunshine, leaving Tugendhat unopposed and Tory members unable to cast their vote against him.

Labour fear factor 3/5 He has polled well among voters at large but his premiership would come under instant attack from the right.

A surprise entrant into the Tory leadership race, but Badenoch has become the favourite of an insurgent, disruptive brand of Conservatism that has been growing since Brexit.

She has proved popular with younger and newer MPs but was also given an early boost by former leadership contender Michael Gove. It is easy to see why – she is a no-nonsense, small state “anti-woke” Tory who has already slated the online harms bill as “legislating for hurt feelings”. She has denounced “identity politics” and championed free speech.

However, she is also closest to Sunak in the hard choices school of economics, refusing to make sweeping tax cut commitments. She is cultivating an image as a deep thinker, pointing to her background as an engineer. However, her self-confessed lack of filter means she could yet trip herself up.

Biggest mistake She has already said she has struggled to find a dentist and the NHS is in crisis – a strident attack on the government she served in.

Weakness Has backed delaying net-zero commitments – which may leave her isolated against other runners.

What opponents say Has already faced public rebukes from Nadine Dorries, the culture secretary, over her attack on the online harms bill.

How they win Mordaunt fails to impress, the Truss campaign goes badly off the rails and the Tory right, encouraged by Gove, swings behind her. Members then fall for her blunt, unspun style.

Labour fear factor 2/5 Inexperienced, but a figure with a strong personality that could make Starmer look cautious and dull.

The contender who has come from nowhere is now installed as a frontrunner. Mordaunt has been in parliament since 2010, but even Tory MPs have been asking colleagues what they know about the trade minister.

Despite an oddly pitched opening video and launching her campaign in a sweltering room, her campaign took off last week and saw her cruise into second place among Tory MPs. She also leads in an early poll of party members. The lack of knowledge about her views and appeal as a fresh face come despite a long and varied ministerial career covering several departments – including a short stint as defence secretary.

She has managed to gain appeal thanks to a natural authority in front of the camera. However, she appeared to lose ground and momentum in Friday night’s TV debate, sidelined by Sunak and attacked for her alleged views on trans issues.

Weakness Largely untested, and as the sudden favourite will now face heavy scrutiny from opponents and the media. Truss allies will be out to trip her up.

What opponents say She has faced accusations of being absent from the international trade department and unproductive as a minister – something she and others who have worked with her deny.

How they win She sees off a few days of heavy scrutiny to hold on to second place, winning votes from Tugendhat and Badenoch supporters. Tory members embrace her as a fresh start.

It was just a few weeks ago that his wife’s status as a non-dom and his possession of a US green card seemed to have ended Sunak’s leadership hopes, yet the former chancellor is now a frontrunner once again.

Sunak has sought to frame himself as the person trying to show he is willing to have an “honest conversation” with the electorate about the need to get inflation under control before tax cuts can be sanctioned. It is a brave move, but he has been making a virtue out of the flak he has taken from other candidates and MPs over his refusal to back immediate tax cuts, saying it is a sign he is willing to be unpopular to do the right thing.

It is an argument for prudence and responsibility designed to contrast with Boris Johnson as well as his fellow contenders – but when the electorate is made of Tory MPs and Conservative party members, it comes with risk.

Weakness Always described as “slick” – a pejorative term portraying him as elite and monied. His personal wealth will be targeted.

What opponents say Sunak was a “socialist chancellor” according to Jacob Rees-Mogg. There is no worse insult in a Tory leadership election.

How they win He only needs 19 more votes to secure a place in the run-off. Then he spends the summer showing members he’s the obvious prime minister-in-waiting. This weekend, he is courting the right with a programme to overhaul EU law.

After months of cultivating an image as the new Margaret Thatcher, complete with pictures with a faux fur hat in Moscow and another driving a tank, Truss has become the candidate for many hardcore Brexit backers, as well as those who remained loyal to Johnson until the end.

She has managed to gain their support despite backing Remain during the referendum, recently winning an endorsement from Suella Braverman, the candidate of choice for the Brexit ultras. However, her bid appears to have stalled thanks to her stilted delivery.

As a result, Truss has attempted to kickstart her campaign with some extraordinary tax-cutting commitments. Her pledges to scrap the national insurance rise, a planned increase in corporation tax and delay green levies on energy bills run to some £30bn. It is a sign of her concern to push ahead of Penny Mordaunt, who has powered into second place among MPs.

Biggest mistake In a gift to punchline writers, she got lost on the way out of her leadership campaign launch.

Weakness Many MPs regard her as a wooden performer in the media and not a great campaigner.

What opponents say “We’re increasingly moving to an anyone but Truss position” – an anonymous MP.

How they win After winning the backing of MPs who had supported Suella Braverman, she surges back into second place and grabs momentum. Tory members then flock to her tax cuts. 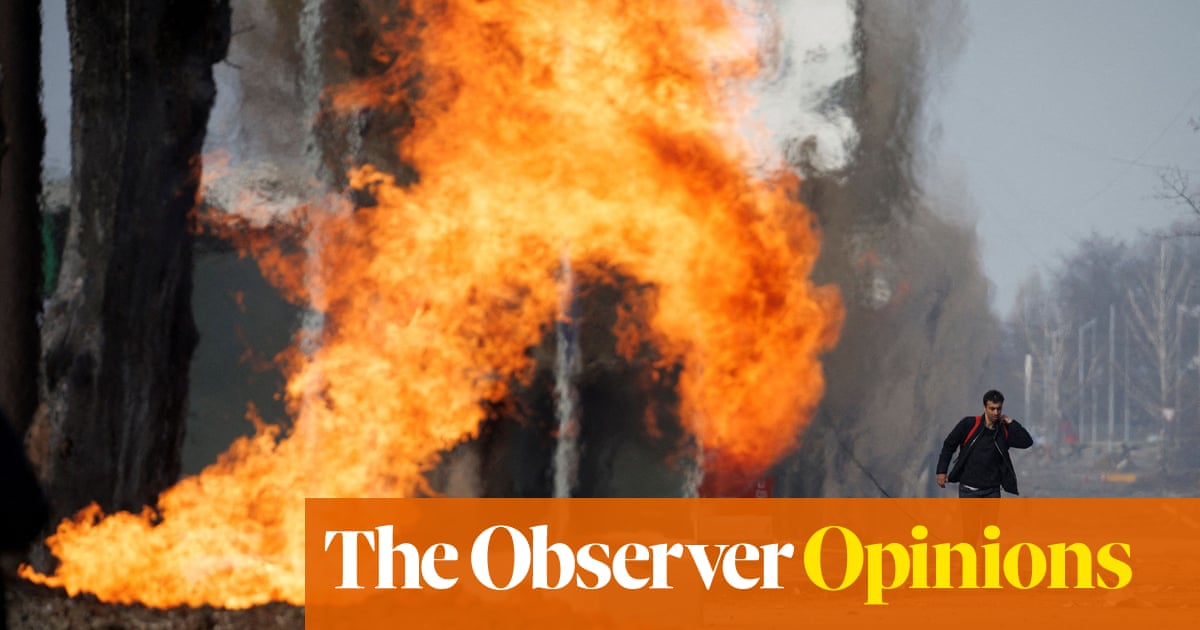 Previous post Putin is already at war with Europe. There is only one way to stop him 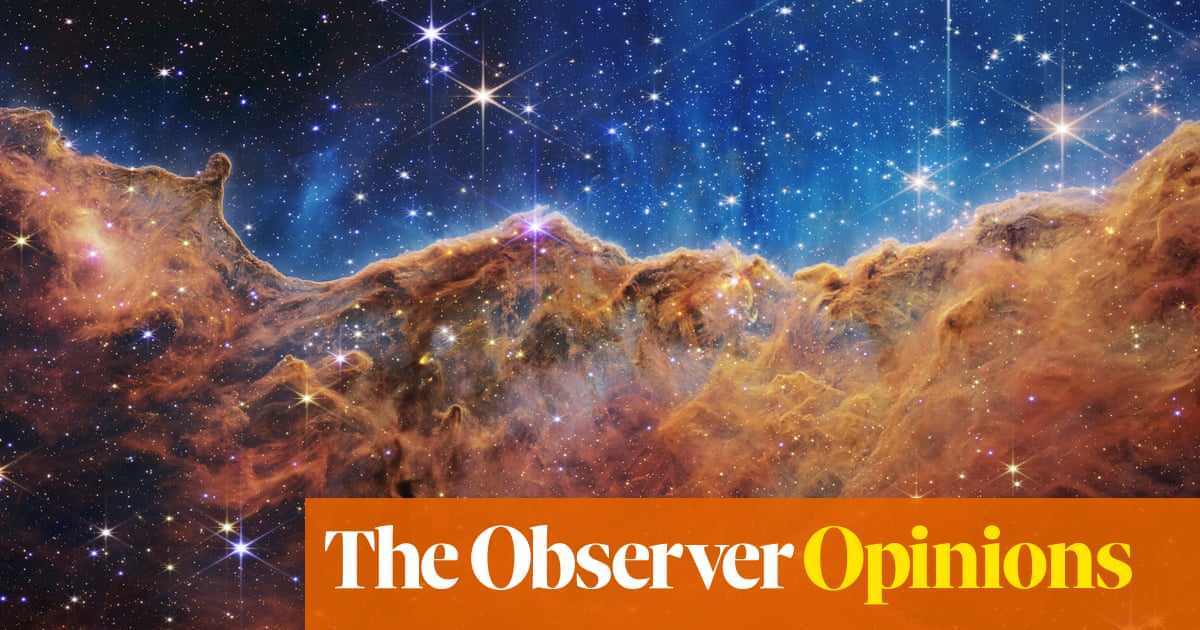